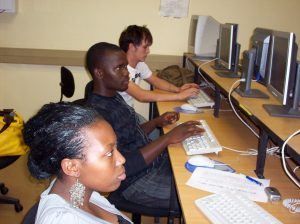 Students at the Pretoria campus work on their assignments. 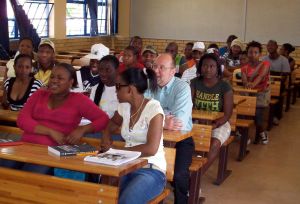 More photos of my students on the Pretoria campus

It’s such a pleasure to see their smiles when they realize that what they have just done is on the web. A week before I got here, they went to Cape Town to cover parliament. So their next assignment from me is to write their parliament coverage on their blog.

I’m particularly pleased because at the beginning of the class, many of them told me they don’t read blogs, they think blogs are junk and irresponsible, and they want to do serious journalism.

That’s when I told them the story of NOLA.com, the web site of the New Orleans Times-Picayune. They all had heard about how Hurricane Katrina had devastated New Orleans. I told them that the only way they knew about New Orleans after Katrina was because of blogs.

The Times-Picayune offices, presses and computers were flooded. Their reporters and editors were dispersed. The only way they could publish was via the blogs that their owners (Newhouse) had recently installed. The blogs were hosted elsewhere. Their servers weren’t flooded. Much of what we know about the aftermath of Hurricane Katrina in Orleans is because of the tool called a blog.

I think I made it clear to the students that a blog is just another tool they should have in their toolbox.

Once they saw that they could be serious journalists and use blogs, they let loose and had a great time.